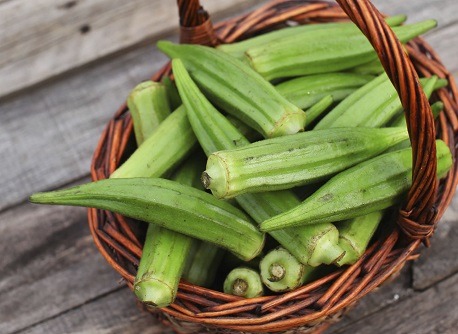 Okra, though very nutritious, can lead to infertility in men of reproductive age, Dr Ochuko Erikainure, a Senior Research Officer at the Federal Institute of Industrial Research (FIIRO), Oshodi, Lagos, has warned.

Mr. Erukainure, also a nutritionist and biochemist, gave the warning on Saturday in an interview with the News Agency of Nigeria (NAN) on in Lagos.

According to him, too much consumption of okra, especially its seeds can lead to infertility in men of reproductive age.

An online publication, www.medicalhealthguide.com says Okra, known in many English-speaking countries as lady’s fingers, is a flowering plant in the mallow family.

“Okra is an annual herb that is widely cultivated for its edible green seed pods in tropical, subtropical and warm temperate climates.

“Okra is a hardy plant that can grow even with less water and in hot conditions.’’

“Gossypol inhibits sperm production and motility by blocking several enzymes that are highly important in energy metabolism in sperm and sperm producing cells.

“Gossypol are oil soluble and natural polyphenol secreted by plants as a defence against predators,’’ he said.

The senior researcher said that in some countries, okra seeds were, however, used for natural contraceptive for men.

“Due to proapoptotic activities in okra seeds (it means killing of cells), gossypol is still under investigation as a possible anticancer agent,” he said.

The nutritionist said that in spite of its effects in men, consumption of okra could be of health benefits to diabetes, obesity or overweight people.

“Okra is very high in dietary fibres, reduce calories intakes into the body, ability to limit nitric oxide build up in the blood and lipid (fat) and reduces the risks of cancers.

“Okra is an African vegetable that has been a staple of African and Indian cuisine for many years, and also used for medicinal purposes.

“The health benefits of okra can be attributed to its nutritional and phytochemical constituents making it a vital crop.

“One hundred grammes of okra has been reported to meet over 20 per cent of the daily values which the body needs.

“It contains a rare combination of carbohydrates, vegetables, minerals and vitamins.

“Not less than 10 different vitamins and minerals can be found in okra such as vitamin A, which is great for the skin, vitamin C and E which prevent cell damage in the body,’’ he said.

Mr. Erukainure said because “okra is high in fibre, it has positive impact on digestive system which assist with gastrointestinal difficulties.

“Including okra in our daily diet along with physical healthy exercise routine will prevent and treat diabetes, meaning that okra plant contributes to a more active lifestyle”.

Erukainure said that okra has been identified to have insulin-like activity in experimented animals.

“It is also a potent anti-diabetic source, which can be attributed to its chemical constituents,’’ he said.