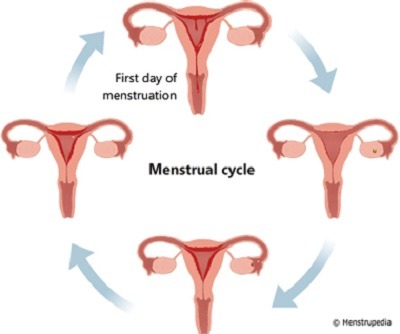 Short menstrual cycle lengths and early or late onset of menstruation are associated with reduced fertility, according to a new study led by Boston University School of Public Health (SPH) researchers.

The findings in the journal Annals of Epidemiologyare the latest from an ongoing internet-based study of more than 2,100 women trying to get pregnant. The new study used questionnaires to ascertain menstrual cycle characteristics and pregnancy status, in an effort to find links between the two. Some participants charted their menstrual cycles daily via an online program, Fertility Friend.

The study found that women who had cycles of 26 days or fewer had reduced chances of becoming pregnant, or fecundability. The average cycle length among participants was 29 days.

Women who started menstruating at younger than 12 years old, or at age 15 and older, also had reduced fertility, compared with those who started at ages 12 to 13, the study found. There was little association between heavy or prolonged menstrual flow and fertility.

“In agreement with previous studies, we found that short menstrual cycles were associated with reduced fecundability among North American pregnancy planners, independent of age, irregular cycles, and history of reproductive illness,” the research team says. “These results indicate that menstrual cycle characteristics may serve as markers of fertility potential among pregnancy planners.”

The authors note that the menstrual cycle is characterized by processes in the hypothalamic-pituitary-ovarian system, and that short cycles may reflect a narrow fertile window or ovarian aging and are associated with a lack of ovulation. A previous study among Danish women trying to get pregnant similarly reported an association between short cycle length and reduced fertility.

Participants in the ongoing study, called PRESTO (Pregnancy Study Online), are 21 to 45 years old and have attempted to get pregnant for as many as six cycles. The researchers track the women’s pregnancy status through bimonthly follow-up questionnaires. In a study published earlier in 2016, PRESTO researchers reported that women with severe depressive symptoms had a decreased chance of becoming pregnant, but that the use of psychotropic medications did not appear to harm fertility.

SPH co-authors on the study include Lauren Wise, Elizabeth Hatch, and Kenneth Rothman, professors of epidemiology, and Craig McKinnon, a doctoral candidate in epidemiology. Researchers from Aarhus Hospital in Denmark and the University of Utah also contributed.